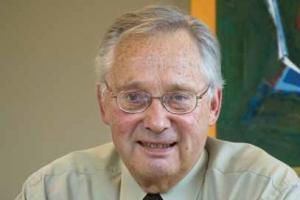 It’s not hard to figure out the reason the Horgan government has hired Tom Berger as counsel in the Kinder Morgan matter – it’s called politics.

The government looked like first graders who forgot their hankies in their first foray into the fray with the Prime Minister, who gave them a dressing down to which the premier and Attorney-General responded with tugs on their respective forelocks and obsequious mumbles of “yes sir.”

It looked like hell to a province that is a great deal angrier than these political neophytes realize. The statement by the Attorney-General that there would be no slowdown of permits to Kinder Morgan astonished many who assumed that “work to rule”, an old effective labour union tactic, would be deployed as a matter of course by an NDP government, and just for openers.

When threatened with the strap by schoolmaster Trudeau, the lad from Kitchener, Ontario could not profess his commitment to strict law and order fast enough.

The first steps had been taken, firmly backwards.

I yield to no man in my admiration of my fellow graduate of the UBC Law class of 1956, the Honourable Tom Berger, QC. Much of the First Nations special legal status under section 35 of the Constitution got the healthy start it required from the Calder case which Mr. Berger handled. (To Keith Baldrey of Global TV, who bloody well should know, the “g” in Berger is soft, as in “verger”.)

But that was over 40 years ago and as Sam Goldwyn observed, we’ve passed a lot of water since then, and Mr. Berger has no doubt pointed that out to the government.

First Nations have won a slew of key cases since then and in my judgment, they will win again. God only knows how many bands will be involved but both governments are acting like it was the old days when at the end of the day, the Federal Government agent consented for the aboriginals and, if necessary, even signed the deal with “X”‘s for them. As with Kitimat in the early 50’s or the 60’s with Shaughnessy Golf Club. 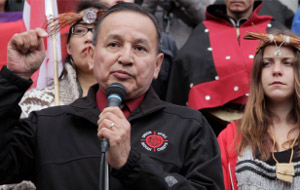 The BC Union of Indian Chiefs is not only a very well organized and well led, experienced warrior group, they are determined. While their Grand Chief, Stewart Phillip, is very much respected throughout the community, the governments have not taken full measure of the man. When he says, and he has, that there is no way the Kinder Morgan line will be built, he means it.

Many, especially in the new provincial government, can’t have read Section 35 nor the actual judgments that have flowed from it.

The legal hurdle the governments perceive that KM must overcome is proper consultation with the various nations. Like governments and large corporations past, KM believes that they have done this. My bet is that they haven’t. While it is not a requirement that the bands consent, consultations that end in “go to hell” are not terribly convincing.

But let us suppose that the courts find valid consultations in all material cases; does anyone seriously think that’s the end of the matter? That as if it were the end of a cricket match at Lords, Grand Chief Phillip and colleagues then solemnly shake hands and say we can’t do any more because someone might sue us?

My sense of it is that when Grand Chief Phillip and his colleagues say that it isn’t going to happen, it won’t.

I’m told that I’m not showing proper respect for the Law.

That sounds strange to my ears coming from Justin Trudeau who, in Paris, in November 2015, pledged this country to a full fight against climate change, signed Canada onto an international law, then not only broke that law with Woodfibre LNG by approving licenses after fraudulent environmental assessment hearings and absent a critical hearing in the width of Howe Sound, now demands that BC conspire with Rachel Notley and him to break international law to bits in getting the filthy muck in the Tar Sands into the atmosphere to further the impact on climate change.

I propose peaceful but large ongoing civil disobedience, the only way dictators have ever been brought to heel and made themselves to protect our rights. I haven’t the slightest doubt they will happen and be huge!

O wad some power the giftie gie us
To see oursels as ithers see us!

You are seen in British Columbia, Prime Minister, along with your political colleagues, as dependent on the fossil fuel industry you pledged to curtail, and have knuckled under to them and the god Mammon, to save your political skins at intolerable cost to the environment and then have the gall to call any who oppose, bad Canadians and lawbreakers.

I’m quite used to prime ministerial abuse, sir. In 1992, one of your predecessors called me a “traitor” and one of his senior cabinet ministers, who later became Lieutenant Governor of his province, called me “Canada’s most dangerous man” because I had the cheek to fight their plan to further subvert British Columbia to the economic jackboot of Central Canadian industrial aggression, using an atrocious constitutional ruse as a smokescreen. In a referendum, you will recall, 67.9% of British Columbians told Brian Mulroney, forgive the expression, to get stuffed.

I suspect you realize that given the chance to vote, BC would reject Kinder Morgan by an even larger margin.

Why, Mr. Trudeau, do you want my province to cooperate and sacrifice its oceans, coastline and sea life in the bargain to pour limitless quantities of poisonous fossil fuels from the Alberta Tar Sands into the atmosphere in direct contravention of your signed pledge on Canada’s behalf at the famous Paris Conference in November, 2015?

And how can you possibly call into question our patriotism for standing behind Canada’s solemn international commitment made by our Prime Minister?

And why do you think that we, who love our province so deeply, would ever pledge our sacred inheritance as hostage to this evil scheme?

I do not pretend to speak for British Columbians but I have not always been wrong in predicting how they will respond.

I believe that our citizens overall stand in solidarity with our First Nations and see Grand Chief Phillip as a first class leader. We are not looking for some compromise or deal – we’re looking for you to go away and for the Province of Alberta to find someone else to pull their poisonous chestnuts out of the fire.

One last thing, Mr. Trudeau – when it comes to defending our homes, traditions and especially our environment, you will find that quite unlike our timid government, the people of BC are not in the
slightest bit scared of being sued.

I hope to God you understand what you’re doing!